You are here: Home / About ACA / Meet the Faculty and Staff / Science and Math Teacher 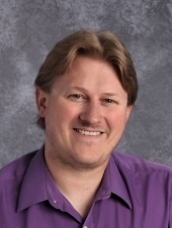 In 7th grade I awoke and started paying attention to the world. I realized I was in a church, but I didn’t want to be there. I didn’t believe in God, nor did I want to. Outwardly, I had no intention of belonging to any church, nor believing the things that they did. Looking inward, it was a different story.

In my heart I was lonely and depressed. I had friends, but were they really my friends? I had doubts about the world. I wanted to know if God existed. I wanted proof. But I was scared that I would get proof: the answer I didn’t want. I remember walking house to house, delivering papers on Tuesday nights. I looked toward the north and quietly asked God to ‘throw a lightning bolt’ in order to prove himself to me. I got no answer. I didn’t know if he existed or not, but I asked that if he did exist, that somehow he show himself to me.

Two years later I met some new friends. I now had a number of acquaintances. I was invited to church, but didn’t want to go. I went anyway. Over the course of two months, I learned what the Bible had to say about me and my relationship with God. I knew that I was in need of help, emotionally and spiritually, and I knew He was the answer.

At that time, God led me to Himself. I didn’t know much about Him. I didn’t even know about Jesus. I just knew about myself. But in high school I was inspired, I learned, and then I finally understood about Jesus and His sacrifice. He gave me peace and hope and joy. I was a changed person. (2 Corinthians 5:17 – Therefore if anyone is in Christ, he is a new creation. Behold all things have passed away, all things have become new.)

I went to Iowa State University, learned about science and math, and became highly skilled in those areas. I eventually graduated with a degree in physics. But I also learned about my responsibility as a Christian. God wasn’t going to call people to Himself without me. I was part of His kingdom and represented Him to the people around me. The things I would do and say could turn a heart towards Him or away from Him.

In 2007, God brought me to ACA. I now teach the upper level science and math high school classes. I am happy to be here, but I always remember who I am and where I was. It was God who made me a new creation, and it is God who can change you.